At the start of the TAP Program I thought I already knew how to work with kids with disabilities because to me it didn’t seem that hard. I knew that working with someone who had a disability would be different and they would need some extra assistance, but I’d never really been in a situation where I had to work with a child who needed extra help. Something I learned about people with disabilities is that you can’t assume things about the way they’re feeling or what they need because only they know what they need to succeed so communicate with them if possible. I also took away the fact that everyone learns in their own way so it would be helpful to have a variety of teaching strategies whether it’s visual, listening, or physical. Everyone with a disability is different which means the way they learn and live their life may be different than someone else with a disability, you just have to be able to adapt to their needs.

This year I worked with a boy who had a learning disability and he never failed to make me smile. It was often hard to keep him on task and he rarely followed along with the other kids, but he tried and he enjoyed doing his own thing. He had an awesome imagination and was always talking about a building with different things on different floors and I went along with it asking him questions about each floor and activity. In order to help him do his work, I would have to ask him each question and then I would write his answer as he would say it or he would write his answer. It’s little things like that which can make learning easier and more enjoyable for them. I realized that despite his differences, he was still like all the other kids and it was nice to see them include him. Working with him was an awesome experience because I not only learned about him, but he helped me understand different ways I could assist him and other kids with disabilities.

I am proud to be a TAP teen because I feel like I am a piece of a larger whole that’s trying to make a change in the way people with disabilities are viewed. I feel like there are a lot of stereotypes about people with disabilities because people don’t really understand them. If there were more programs like the TAP Program where everyone could gain an understanding on this topic, then I believe there would be more change and acceptance in the world towards these people. By being a part of this program I’m becoming educated on not only skills to use when teaching people with disabilities, but about their everyday struggles as well. I want to help these people achieve their goals and live their lives to the fullest because in reality they’re just like everyone else they just need a little extra assistance and there is nothing wrong with that. 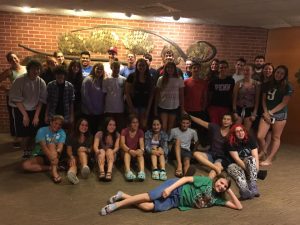 Anna Weinstein is a teen assistant at Temple Sholom in Broomall.