TAP: The Leadership Team that will Change my Life Forever 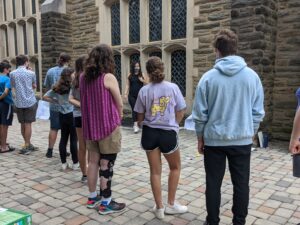 During the introduction workshops for the Reta Emerson Fellowship/Teen Assistant Program (TAP) that took place during the summer, I learned so many things that will hopefully be put into great use into being a more effective madrich (Hebrew school assistant) this year. In the first one that took place in-person at Or Hadash, I learned what the clear differences are between the jobs of teacher and madrichim as well as the jobs that overlap. I really liked this activity because before, I was sometimes confused if jobs I wanted to perform in the classroom were things that were too much for just a teen assistant. In addition, we also looked at many Jewish texts from the Talmud about disability and responded to them. The one that stood out to me the most read, “The stone that the builders rejected has become the cornerstone”. This quote really summed up for me what I want to achieve this year during Hebrew School as well as in my life. I want to really make kids with disabilities feel like they are a part of the group in anything and prove to them that they can do anything they set their mind to, even if it is in a different way. The last activity that I really liked on that day was when we were given tools that could be found in a classroom and we had to figure out ways to use that tool to create fun classroom activities. It really blew my mind when we were told that one tool can go a long way when helping kids succeed and I will definitely remember that when being a madrich this year.

Furthermore, at the second introduction workshop that took place on zoom, I participated in even more activities that will help me be a more effective madrich this year. One of which was creating a resource folder along with all the other TAP Teens to help bring fun ideas to our classrooms. I found this really valuable because it shows how teams, especially in the Jewish community, can work together to make something happen that can really be beneficial as well as special to kids in our own communities. Even beyond this year, I now know that I can lean on the Jewish community if I really need help with something or can’t do something on my own. Finally, we listened to a presentation about Autism and sensory processing. This was really interesting to me because we got to hear about specific examples of ways to help kids who have some issues with different types of processing such as auditory, tactile, or visual. I imagine this year when working in a classroom that I will be running breaks for the students, so this training definitely gave me a better idea of things to do with the students so they can return to the classroom when they are ready. Also, we found out that there are actually eight senses, not five. The other three are vestibular (balance), interoception (internal state of the body, and proprioception (position of the body). This was really cool to learn about because it gave me a broader sense of how we all interact with our world. Overall, I am really thankful for the TAP program as I feel like I have been given a head start on becoming the inclusive Jewish leader I want to be.